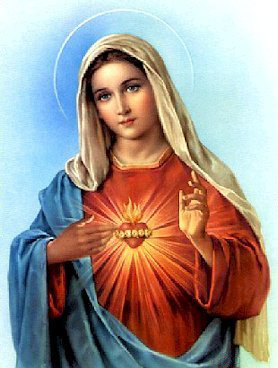 Since the month of August is the month dedicated to the Immaculate Heart of Mary and we are getting ready to celebrate Her glorious Assumption this Thursday, I thought it would be a good time to talk about our Blessed Mother and why She is so important to our lives as Christians and as children of God.

Protestant denominations moved away from the honor of the Blessed Virgin Mary because they felt that it took away from the worship of God and following in the footsteps of Christ. Why, they say, can’t we just go directly to Jesus and to God and why do Catholics push the “worship” of Mary? Well, first of all, we do not worship Mary. Worship is due to God alone. We HONOR and VENERATE Mary for Her role as the Mother of God and as Queen of heaven and earth, just as one might give honor to a respected teacher or an authority figure. Worship, however, is indeed reserved for God. Mary is not our Creator and Redeemer. These titles belong to God; therefore, God is the One we worship, not Mary.

Ok, Protestants might say, so I get how it’s different and why we should at least acknowledge that Mary is important, but still, why is She SO important to Catholics, even to the point where they have feast days in Her honor? Let’s start with a practical example.

It’s well known and upheld by the Church that children have a right to a mother and a father. No matter what people, even sadly some Catholics, might say today, it’s just not the same or healthy for a child to have two mothers and two fathers or even just one parent (aside from tragic circumstances such as one parent dying). When God created Adam and Eve, He created them male and female and commanded them to “be fertile and multiply” (aka have children and raise them up in a family with them as the parents). Aside from the fact that parents being one mother and one father was willed by God, it makes sense psychologically for children to be raised by a mother and a father. They get a healthy sense of what each sex brings to a marriage and the family. A male and a female each bring qualities that are naturally essential to the health and wellbeing of a child, making the family thrive as a whole. Fathers show the strong, supportive, masculine side of the family, being the rock that holds it together and supporting it. They show their sons how to treat a lady by the way he treats their mother and they show their daughters how they should expect to be treated by a man. Mothers show the caring, nurturing side of femininity and they teach their children how to treat others and show their daughters how to conduct themselves with their future husband. In order for a child to be well-rounded and have a healthy, clear perspective on family and society, they need a father and a mother.

So, how does this information relate back to Mary? Well, like I said, in order for a child to be well-rounded, they need a father and a mother. And we are the children of God. He is our Father and if He willed for the earthly family to consist of a father and a mother, wouldn’t He know that as His children, we also need a mother? This is why He gave us Mary. He didn’t want us to be without the caring, nurturing guidance of a mother on our way Home to Him. Yes, we can take guidance from the life of Jesus, and we should, but at the same time, it’s always good to have multiple examples. When you were learning subjects such as math in school, your teacher didn’t just give you one example and then expect you to understand it fully. No, he gave multiple examples so that you could see things from a different perspective. And this different perspective in our spiritual journey is the feminine perspective, leading us by caring for and nurturing us in that special way that only our Mother can. And Mary is the PERFECT example because, as Father Mark Mary said recently during a homily on EWTN, the dignity given to Her by virtue of being the Mother of God surpasses even our own dignity as brothers and sisters of Jesus Christ. Being chosen to bear in her womb the Son of God meant that She was perfectly conformed to Him. Therefore, She is the ultimate role model for us to learn to conform ourselves to Him.

There are other, deeper ways that we are shown that God wills that we honor Mary. For example, just look at the simple fact that Jesus was born of a woman. This is magnificent because He is God. He could have just descended from heaven or chosen some other way to come to earth. Doesn’t the fact that He chose to be born of a woman imply that She would be pretty important to us? Doesn’t it show that God meant for Her to be honored by us because She gave birth to the very God who would save us? You can’t just say “Oh, She was the way for Jesus to come to us, but that’s it.” That’s an insult to God. He wants us to honor Mary as an important part of our salvation history.

Besides being the mother of Jesus, how do we know Mary is an important part of salvation history? Just look at the book of Genesis, right after Adam and Eve had sinned. God punishes them, but He also promises a Savior that will come and redeem His people. And He also points to Mary. Addressing the serpent, He says, “I will put enmity between you and the woman, and between your seed and Her seed; He shall bruise your head and you shall bruise His heel.” (Genesis 3:15). By the “woman,” God is referring to Mary and Her seed is Jesus. But if Mary wasn’t important, then why did God mention Her and say that He would put enmity between Her and Satan? (Spoiler: Because She IS important!) She is in this battle with us! Not only is Jesus helping us fight off Satan, but so is Mary. If Mary wasn’t important to our salvation, Satan wouldn’t give a hoot about Her! And there wouldn’t be a reason for there to be enmity between Her and him. But there is because God intended for Her to be our Mother as well and for us to get to Jesus through Her.

If you don’t really know Mary that well, ask Jesus to help you get to know Her better. If you already have a devotion to Her, continue to cultivate it and pray to make it stronger each day. Praying the rosary is a wonderful way to spend time with Her. She is your Mother and She wants to guide you and lead you to Her Son. It’s ok to let her, for as St. Maximilian Kolbe said, “Never be afraid of loving Mary too much. You can never love Her as much as Jesus did.”

View all posts by eberns4553